Simulators in EmbedOps: Another Reason DevOps is Beneficial to your Embedded Development Workflow

Arm is no stranger to DevOps or Continuous Integration (CI). They have  several pipeline scripts available  for Travis CI and outline how they use Jenkins to build and test Mbed OS. But so far, there has not been a demonstration of how to use a simulator in pipelines. We partnered with Arm to show how to use Fixed Virtual Platforms (FVPs) to test your code in a CI pipeline. We are using EmbedOps, a CI tool compatible with GitLab that is designed for embedded developers. We will share how we’ve seen onboard testing, real, and simulated; how we have helped embedded teams and how we accomplished it using  Arm Ecosystem FVPs  for the  Cortex-M55; and we share some of the improvements we would like to see to make this tool work even better for FVPs.

What simulated hardware testing does for your team

In the development of embedded systems, real-device testing is mandatory before releasing to capture bugs that show up only in real hardware. To have consistent functional verification, manual testing is done by developers when new features are implemented. This can be time-consuming and error-prone. Sometimes, the developer could be debugging a problem with the firmware that could actually be a hardware issue. By using simulated hardware, we can reduce the chance of seeing bugs on the real hardware, and have a reliable way to eliminate firmware as a root cause when they do occur.

Complete development on a tight schedule

Development time can be reduced even further by integrating the hardware simulation into CI pipelines. With CI integration, the firmware can be tested with the simulated hardware with every push to the version control platform.

Lower the cost of prototyping

With the advancement of technology, electronics hardware is getting less expensive. But that is not the case when it comes to product development, where lots of expensive prototypes are usually required. Instead of every developer having real hardware, each of them can have a copy of the simulated hardware on their computers. Let us take the recent pandemic as an example. Developers have started to work remotely from home at unprecedented rates. With each developer having the simulated hardware, development can get started immediately. And while final validation is performed with real hardware before releasing, testing can happen earlier in the process, avoiding the costs of spinning up new hardware revisions.

How we built a CI pipeline for simulation

The CI pipeline of the  Arm Cortex-M55 hello world example  has two simple jobs: a “build” job that builds the source code and generates the AXF files, and a “simulate” job that runs the simulation. The AXF file is an object file generated by the Arm compiler, which contains both object code and debug information. For this demonstration the source is not actually compiled. Instead, a simple script fakes the build and copies a pre-built AXF file to the next stage.

With a Docker container, the simulation can be run in an isolated environment. While a developer  has to build the docker container manually, on the EmbedOps platform the same developer can modify the Dockerfile included in this  example project to build your own FVP image. The Dockerfile downloads the FVP from the  Arm developer website, installs the requirements for running the simulation, and has the simulator ready to be used in the CI pipeline. To create a custom Docker image for a different FVP, update the URL and file name with the desired FVP.

FVPs include a UI and the UI is opened automatically when simulation starts. When working locally with the simulators, this visual representation is valuable. However, to incorporate simulation in a CI pipeline, the UI is more of an impediment than an asset. Having a version of the simulator that is designed to work on the command line smooths this process and increases the value of using the FVPs in a CI system. Automated reports on how the model is running save the developer time manually checking the model and provide a recorded history of how the model performed as code was developed. For CI purposes, we created a config-ci.txt based on the config.txt file you would use locally with the UI and made the following modifications.

Set the visualization parameter to 1 to disable the UI window.

Add a file location for an output file.

While the simulation is running, a telnet session is created to capture the serial print statement output by the program. To validate that the AXF file is actually running on the simulator, the script checks if the expected output string exists in the uartOutputFile. The job passes if the output matches known-good output.

A screenshot example of the FVP simulator GUI. 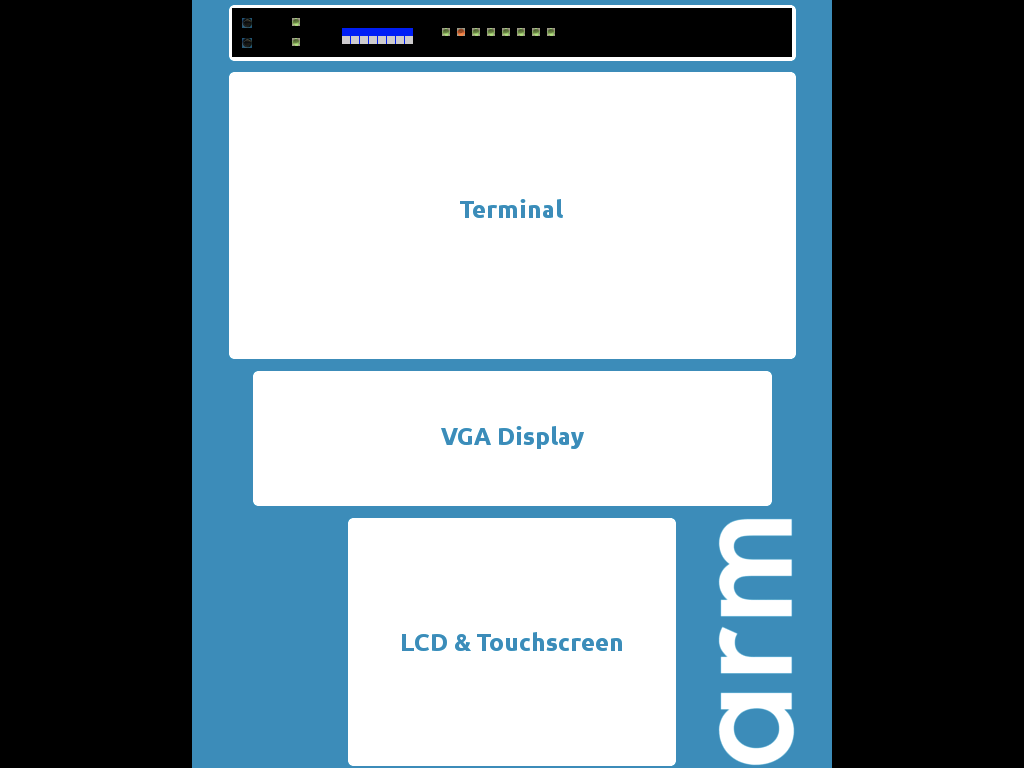 Where we are hoping to see simulators go

We created an FVP model Docker image for this example, so we know it is not impossible nor difficult. But maintaining these images and supporting security checks and updates is often put on the back burner when teams are busy with all the work of getting a new product shipped. With official FVP model Docker images, the time for developers to get started using the Arm simulators both locally and on a CI pipeline would be markedly shortened. And it would allow for teams to work together without worrying about differences in their development environments affecting results. In the meantime, the EmbedOps container registry hosts a  Corstone-300-FVP-M55 container  that is regularly scanned and updated.

Dojo Five brings modern tools, techniques, and best-practices from the web and mobile development environments, paired with leading-edge innovations in firmware to our customers to help them build successful products and successful clients. We have talented engineers on hand ready to help you with all aspects of your EmbedOps journey. Bring your interesting problems that need solving – we are always happy to help out. You can reach out at any time on  LinkedIn  or through  email.